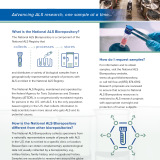 The Need:
The Agency for Toxic Substances and Disease Registry (ATSDR) needed assistance with establishing a biorepository of specimens from persons with Amyotrophic Lateral Sclerosis (ALS) enrolled in the National ALS Registry. A biorepository would provide approved researchers with biological specimens from geographically dispersed confirmed ALS cases with a goal of propelling ALS research and eventually finding a cure. ATSDR initially contracted with McKing to conduct a pilot study to determine the feasibility of creating a National ALS Biorepository; McKing conducted the pilot study and developed a protocol with input from an expert panel. Following the conclusion of the pilot study, McKing was awarded the contract to implement the Biorepository as a component of the National ALS Registry. In addition to specimen collection, storage and distribution; McKing is also responsible for strategic marketing of the Biorepository to researchers, promoting the Biorepository through partnerships, audience outreach, materials dissemination, conference exhibits, and more.

Results:
After seven years in operation, over 1,400 participants have provided blood, urine, or saliva donation, and more than 13,000 samples have been distributed to researchers for analysis. For the postmortem component, 64 participants enrolled, and we have completed 50 collections.